This mod is for Skyrim LE or Skyrim SE.

This mod installs silent music files which the game will load instead of the original music, disabling the music.

You choose which music to disable by type ( personally I prefer to disable everything except Discover Special locations, Reward music, Tavern music, and the two Special music options for the DLCs )

Resulting in no invisible orchestra throughout the game.

You could just turn the music volume down in settings ..

But then you dont get to hear Tavern music for example

( because the music volume turns down all music )

With this mod you selectively silence music by type.

Also you will not get any hints from the music of any danger ( explore music changing to combat music - you can't hear it ), immersively its a better experience. Now you will be a bit more cautious in your travels.

You will get to hear more of the games sound effects and ambient sounds a bit more clearly around the game too. Including other mods sound fx like AOS.

For anyone who has the repeating combat music bug, that is a game engine bug which nobody has been able to fix, the same bug was also in Oblivion, FO3, and FONV before Skyrim. The Unofficial patch team are unable to solve that problem soo .. Just kill it with this mod

And .. Just maybe .. Trolls might not be so bad tempered if they dont have to wear pink ear muffs to go to sleep in case you wander past with your stupid invisible orchestra keeping everyone awake. Disclaimer : I cannot be held responsible for Trolls jumping up and down wildly gesticulating after you have installed the mod, you may have upset them all too much already.

( This may sound weird, but remember you are installing silent music files )

If using Nexus Mod Manager, it will use the scripted installation. Follow instructions and make selections. 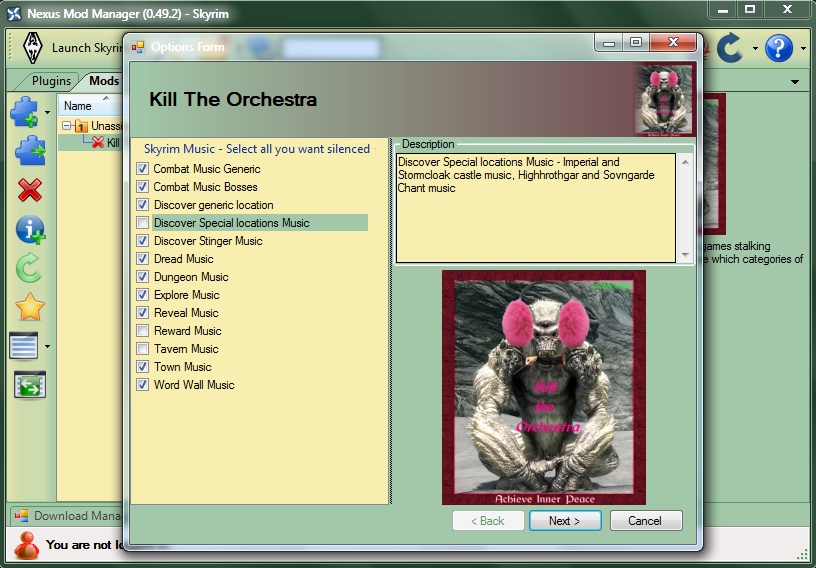 If using Wrye Bash, after putting the zip in Bash Installers, go to the Installers tab and right click the zip, and choose Wizard install, follow instructions and make selections. 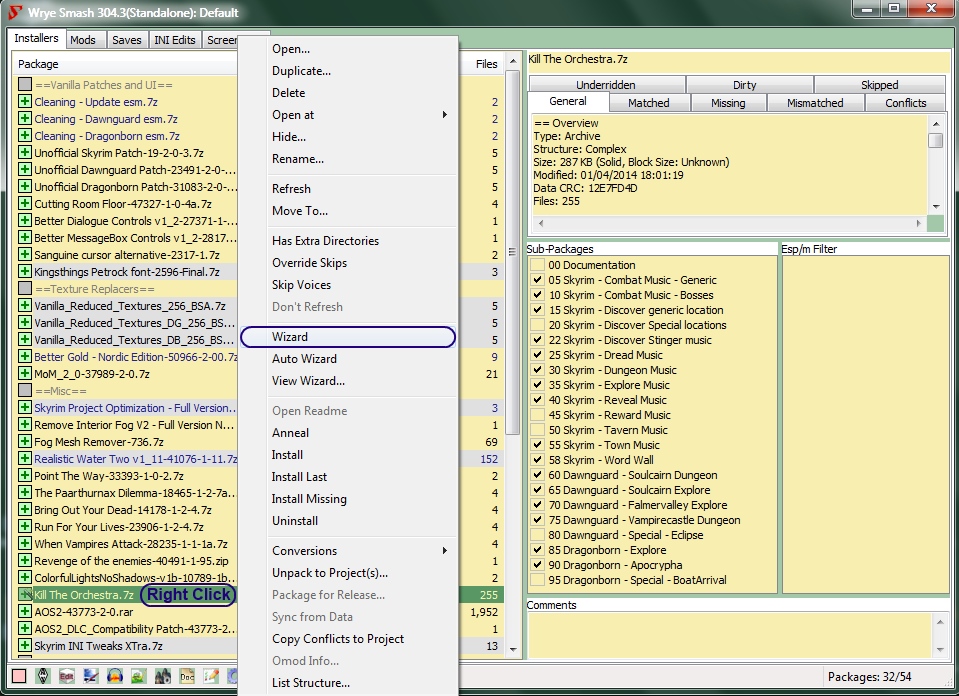 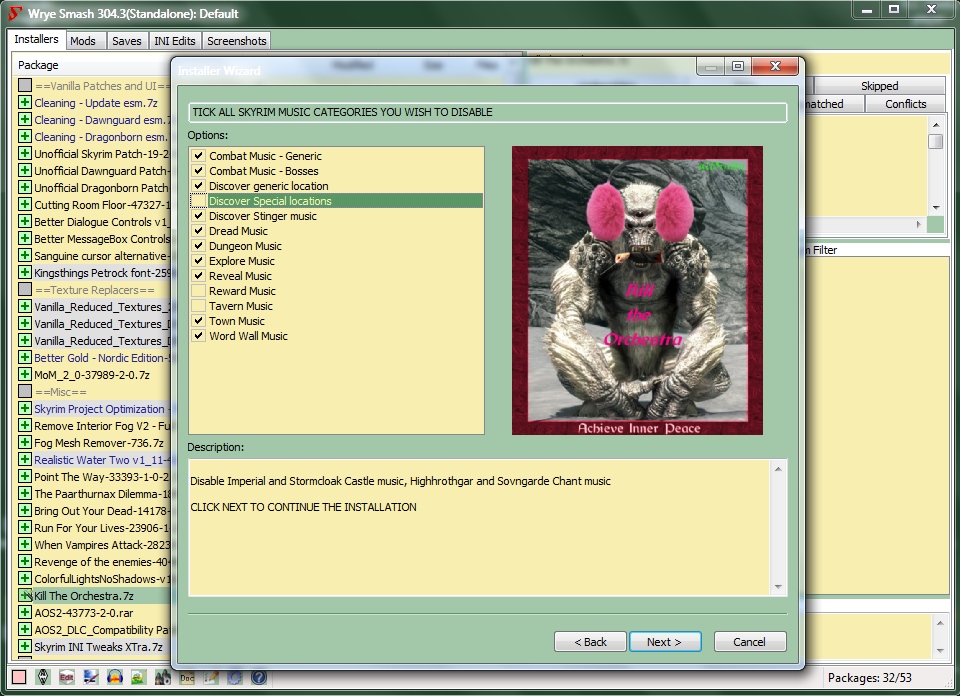 Extract the archive with 7zip

Copy the music folder(s) of the music you want, to skyrimdata folder.

For example, if you want to disable only Skyrim exploration music, copy ..

NMM / Wrye Bash users just get your mod manager to un-install / re-install it as required with different options or none.

Too much cache brings out a game engine bug = sounds are repeated for different items when they should be playing a different sound, lowering the cache limit to 8mb makes the game refresh the cache more often, preventing repeated sounds for different sound events. Picking up a gold coin for example plays the generic pickup sound. Picking up a second gold coin plays the right sound, and this will last until you leave the area or switch to picking up other things. This tweak solves the problem.

And seeing as you are also using Kill The Orchestra ( short 4 second duration silent sounds at only 28k each replacing the original music files some of which were as big as 100mb ), there is even less need for such a huge sound cache.

If you experience any problems ( similar to the ones mentioned

in this post﻿ ) then try the setting at uMaxSizeForCachedSound=65536 instead. For some machines ( seems to be rare ) your mileage may vary, the problem and solution effectiveness are variable, probably depends on drivers and different motherboard sound setups.

In this mods case, used to create the one file which was used repeatedly to replace all the files we needed to silence.

I use Audio Overhaul for Skyrim ( AOS v2.5 at time of writing ) which changes the games sound fx, but does not change music .. So yes that mod for one is compatible. Sounds of Skyrim I should imagine is similar if you use that instead. My mod has no plugin or records to worry about, no scripts or references which will become embedded in your save game, just plain ol' replacer music files.


Install / remove / overwrite as much as you want.
Though overwriting them with someone elses music files will give you different music ..
That becomes your problem in deciding what you want, these or those, simple.
As is any Mod manager related questions.
Go forth and rtfm.

Lastly : Note I will not be supporting any new Mod Managers which come along, I have left the Bethesda games modding scene and have no intention of coming back. If it works with whatever is new since Wrye Bash and Nexus Mod Manager then that's a bonus, not intended or anticipated. Any mod manager which uses Wrye Bash BAIN scripting or OBMM (like NMM, maybe even the newer Nexus Mod Manager (forgotten its name)) scripting should work fine. Otherwise revert to manual installation, if you know how.


olympusgames, GMOD, ModDrop or PlayAsHell sites do not have permission, to upload or redistribute any of my files, images or descriptive content, past, present or future.