So ... this mod was born in an effort to fix these shortcomings.

This mod starts by fixing the .50 Caliber Ammunition itself, making it's range more appropriate (something which will benefit all .50 Caliber weapons).

With that out of the way, this mod ups the impact of the CC Anti-Material rifle to something inline with a .50 Caliber weapon.

Once that is fixed it ups the range of the weapon so that one can effectively hit targets at longer rangers.

That pointed to a shortfall in the optics, so the Recon Scope was enhanced to allow the shooter to actually focus on a target at those longer ranges.

So, with all that, I give you Truck Stop. This weapon, based on the CC Anti Material Rifle, will stop just about any soft target in one hit, and do so at ranges which will often not alert the targets companions.

You can find Truck Stop lying in the chest of a dead Raider in the Glowing Sea. Just follow the radio beacon.

Now, there is a caveat with this weapon.   This weapon operates at the extreme limits of the games engine.  If you engage a target at the extreme range of this weapon, there is a chance that the cell will reset before you can get to it, and the spoils will be lost.  So either expect downed targets to be lost to you, or use the weapon at shorter ranges. 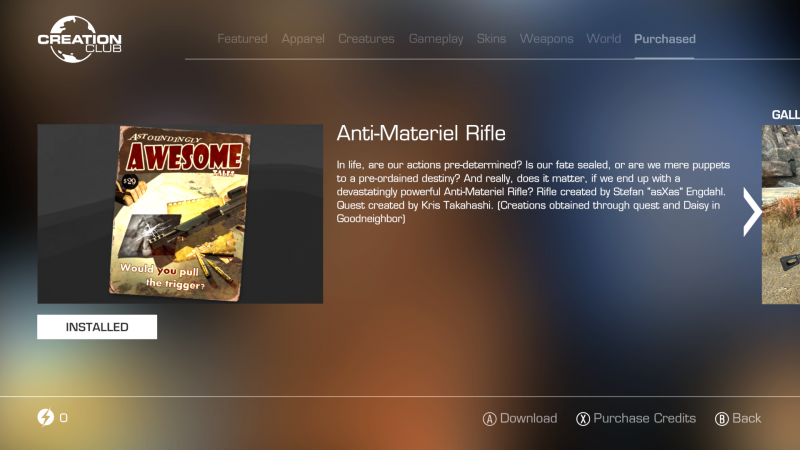 This mod was cleaned with Xedit 4.04.

If you wish to contact me about this mod, you can do so here or on Discord at
https://discord.gg/jW7m65uNW7

This Mod is intended for game play only. Any other use is expressly prohibited.

I managed to back-level this mod before uploading it, so now I must upload it again with the corrections.  Being human is such a pain ...